Introducing your friendly Saigon blogger’s biweekly-ish digest of roughly two and half hours worth of reading and viewing on Saigon, Vietnam, Asia-Pacific, and Asia’s intersection with New York City.

Right here on 9000 Hours in Saigon, Mike from Along the Mekong posted a query about getting your foot in the door at expat magazines to the About section. Check out my lengthy reply if you’re a budding wordsmith in Vietnam. 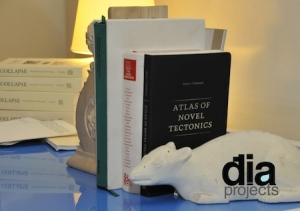 After a long absence from the blogosphere, contemporary artist and dia/projects founder Richard Streitmatter-Tran has dusted off diacritic.org and logged a breakdown of dia/projects’ activities one year since its opening.

Meanwhile, the folks inspired by the original diacritic have been reliably churning out dispatches from the diaspora. This week, the diacritics (plural) published articles on a surviving warren of Vietnamese refugees in France, contemporary art photography in Phnom Penh, spoken word artist Bao Phi, and Tran Anh Hung’s latest film, Norwegian Wood.

Being back in New York has its advantages–like getting to visit Ai Wei Wei’s new public sculpture in Grand Army Plaza. The Asia Society has a short post and two-minute video on Circle of Animals/Zodiac Heads on its blog.

If that blurry chef in the background of the lead photo for this New York Times article looks vaguely familiar, you were probably a regular at Pham Ngu Lau’s Bread &  Butter during the past couple of years. Liza Queen is back in Brooklyn and serving up the Vietnamese fare she learned to make during her tw0-year stint in Saigon. Look for her bun thit nuong and banh xeo under the banner of Queen’s Dahn Ta at the Brooklyn Flea’s new all-food market, Smorgasburg.

And speaking of Western chefs in Vietnam, you can check out the Phan Thiet/Mui Ne segments of Gordon Ramsay’s Great Escapes on muinebeach.net (for which blogger Adam Bray was a consultant).

Reading Geoff Dyer at the MET

I visited the MET after finishing The Ongoing Moment, Geoff Dyer’s not-quite-comprehensive survey of photography. Dyer writes considerably on Evans, and I wanted to see if I could trace what Dyer calls his “inventory of American memory,” from the clandestine subway shoots to his latter-day Polaroid experiments.

But instead of a proud print collection anchored by the MET’s extensive Evans collection, I found a lonely corridor of about a dozen prints (none by Evans), a well-appointed mezzanine between wings of the MET’s European painting collection.

Stieglitz would have been apopleptic.

Not ready to recycle my MET button, I instead tried to extend Dyer’s thesis in The Ongoing Moment to this inglorious collection. Essentially, Dyer draws lines between found motifs — hands, benches, open roads, anything — and posits that photographers are in conversation with one another. Writes Dyer: “Often it turns out that when things have been photographed they look like other photographs, either ones that have already been taken or ones that are waiting to be seen.”

Despite a limited catalog, Dyer’s thesis held up. The Ongoing Moment offers readers a way of seeing, and so, deserves a spot on every traveler’s bookshelf. Here’s what I saw:

A hand tests the threshold of the picture plane, a study in “selective focus” by Czech photographer Lucia Moholy. Though she is exploring, in the curator’s words, the Bauhaus view of photography as a “specific technique to be systematically explored in the modern spirit of exuberance,” Moholy’s iconography seems easily explained. Dyer cites various sources who imply that photographers are drawn to hands because, while artists of other mediums struggle to approximate their likeness, rendering them is a snap for photographers.

I glanced back at the preceding photo, André Kertész’s Distortion. A lamp bends in a funhouse mirror to imitate the contours of a nude hip in the background. Resting on the lamp is a delicate hand, a cigarette burning between fingers. It is a playful still life, a departure from Dyer’s Kertész, documentarian of the blind accordionist and transitory cloaked man. What remains is the Kertész who feels perpetually unappreciated — Kertesz first shot with these mirrors in 1933, the period his work fell out of vogue in Paris. Distortion, taken in 1938 after his unhappy exile in America, seems to affirm that Kertész — if only Kertész — remained convinced of his enduring contribution to the form.

Umbo‘s Mystery of the Street (1928) likewise demanded a second look at William Klein‘s Down from my hotel window (1954). While Umbo turned his overhead viewer upside down to render the reality of his street scene purposefully dubious, Klein is merely elated at returning to New York City. The scene below, for him, captures its gritty energy: a crowd gathers around three parked cars, one with passenger side doors mysteriously ajar. We cannot tell for certain in the hazy, light-saturated print, but another of the cars, with its dichromatic hood, appears to be a police cruiser. Though their projects are not identical, both artists, like those discussed by Dyer, are attracted to the window by its irresistible promise: to render the photographer invisible.

Interior Detail, Château Impérial (1867) by Charles-David Winter anticipates the “eternal arcade” and its “inbuilt capacity for memory” (Dyer) that Evans captured by photographing a seemingly endless corridor reflected in a mirror in 1931. Ironically, Winter’s image appears to be the older, haunted version of the later photo by Evans. The mantle below the mirror is rotten with time; the shadows that gradually swallow the corridor are denser. And though we know the black veil is really just Winter beneath the photographer’s sheet, the spectral figure tucked into the bottom right corner consumes the viewer’s attention. Evans’s image is unadulterated by this presence. As Dyer notes, Evans “liked to ‘suggest people sometimes by their absence.'” Winter suggests absence by his presence.

And in the last photograph, Dyer’s man in the black hat and cloak. Throughout photographic history, he is always obscured, in retreat or distant from the picture plane. Stieglitz encountered him on Fifth Avenue in 1900. Strand photographed him in Central Park in 1913. Andre Kertész couldn’t escape him. And in Steve Schapiro’s image of him in 1961, he steps into a thick fog, “marked by elegy and nostalgia,” Dyer says, he “prepares to pass away, disappear.” If this is the case, then perhaps he first stepped into the frame for Louis-Auguste Bisson and August-Rosalie Bisson in Portal of Saint Ursin, Bourges (1855). Staring up at a set of Romanesque doors installed in a more modern building (gazing at time out of place?), he offers only the top of his top hat. Here, he sets his precedence for occlusion in the Old World.