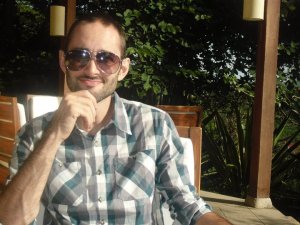 Tom DiChristopher is a Brooklyn-based multimedia journalist who finished a tenure as managing editor for the  culture and lifestyle magazine AsiaLIFE HCMC in Vietnam in October 2010. He is a graduate of the CUNY Graduate School of Journalism and works for CNBC as a producer. On this blog he writes about Vietnam, things Vietnamese, travel, culture, and whatever city he finds himself in.

Tom moved to Ho Chi Minh City, Vietnam in March, 2008 to jump start his career in magazine travel writing. However, he soon fell in with AsiaLIFE and took over as managing editor shortly after. For the next two years, his life became a blur of deadlines, revised budgetary structures and Bierre Larue.

Prior to moving to Vietnam, Tom  worked in Manhattan for budget travel website eurocheapo.com as their New York correspondent and later contributed to the redevelopment of europeanhostels.com. In his free time, he broadened his palate, frequented dodgy bars and generally became snarkier due to prolonged exposure to New York. He also lived in Rome, Italy for a short period in college, during which time he traveled around Western Europe.

Also during college, Tom devised an independent study in travel narrative, which was mostly an excuse to travel for college credit. The capstone of the project was a 7200-mile road trip across the United States made in 11 days with two friends in a Mitsubishi Mirage. Miraculously, the three are still close friends.

His interests are comic books, politics, public transportation, and solipsism.

17 responses to “About Tom DiChristopher”